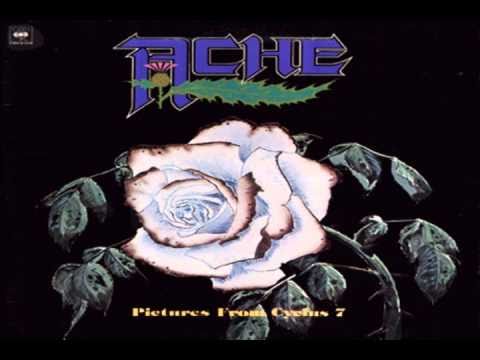 This Danish band was founded in ’68 and featured Torsten Olafsson (bass and vocals), Finn Olafsson (guitar and vocals), Peter Mellin (organ and keyboards) and Glen Fisher (drums and pecussion). They made two albums: “De hombre urbano (’70) and “Green man” (’71). They spent the next two years working on an extended piece called “De Homine Urbano”, which was released as programme music to an experimental “rock ballet” in 1970. Released on the Philips label the same year with an accompanying single of non-album tracks, it netted positive reviews in the Danish press. ACHE’s “rock theater” created something of a sensation in the rock underground, and “Green Man” followed in 1971. The next major ACHE project, by a revised six-piece version of the band, was a conceptual work called “Pictures From Cyclus 7”, written in collaboration with lyricist Bo Lillesöe in 1975 and released one year later. Ache have remained active on and off, albeit sporadically, ever since. Their only other major work (i.e.: not counting singles and compilations) has been “Blå som altid”, a folk-oriented album released in 1978. The music is similar to the Early British Progressive Rock Movement (JULIAN’S TREATMENT, RARE BIRD, BEGGAR’S OPERA, ATOMIC ROOSTER), the German Krautrock (early JANE, ELOY, RAMSES, TRIUMVIRAT) and Dutch masters EARTH & FIRE (their early, con-commercial era). In 2000 both albums were released on 1 CD entitled “Ache: De hombre urbano + Green man”. The music is based upon splendid keyboardplay (many floods of Hammond organ) and some fiery electric guitar. The first album contains two ‘side-long tracks’, the atmosphere is typically end Sixties and early Seventies with lots of solos and long, exciting interplay between guitar and keyoards, like jams. The second album includes shorter songs but the climates are in the vein of the first LP. If you listen to this CD, it’s incredible that the magnificent keyboardplay is delivered by an unknown Danish musician! In May 2003, after a break of 20 years, the Danish rock band ACHE re-united, having committed themselves to creating a new song in support of the world-famous, however still politician-threatened alternative city “CHRISTIANIA” – or “Freetown” – in the heart of Copenhagen, the capital in Denmark.
Finally, in mid-April 2004, ACHE’s Christiania song “De skæve drømme” was released on CD-single in Denmark (English trsl.: “The Alternative Dreams”).